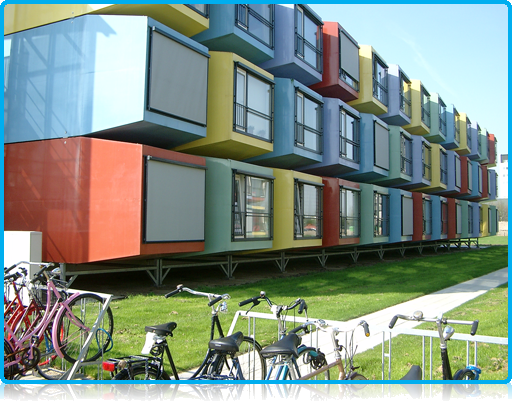 Outside of the EU ruling, the Dutch social housing sector experienced other issues over the course of the 1990s and 2000’s. The building sector experienced a boom in the 90’s which led to large profits and the net worth of the social housing industry to increase to around 200 billion euro. This growth coupled with the lack of proper checks and balances led to speculation, inefficiencies and in some cases fraud. The professionalization of the industry did not keep up with the growth and it became evident in 2008 that problems existed. As one MP said ‘It was a poisonous cocktail of over-ambitious directors, failing regulation, a lack of clear boundaries and self-regulation,’. Strange cases came to light like the social housing corporation that spent over 250 million euro on fixing the SS Rotterdam, a former ocean liner, as a project of urban renewal. The project went over budget by 220 million euro and spent money on what could have been new social housing units.[1] A social housing corporation boss driving a Maserati as a company car is another example. All of this combined with other problems meant new regulations needed to come into place to affect real change.

The change in law affects what, how and when a social housing company can develop social housing. The social housing corporation can no longer act as an independent player. The corporation must work in conjunction with both the tenants and the municipalities. The housing corporations will need to develop social housing as negotiated and agreed upon with the municipalities and tenant rights groups. It is triangle that is now in affect and it provides more clarity on what will be developed and what the needs of the city and residents are. Municipalities will develop five year plan on housing needs. The needs outlined become the priorities for both development and remodeling. This all takes place starting July 1st of 2015. The technical expertise needed to make comprehensive housing plans may not be on staff at some municipalities. On top of that, the tenants may not have the expertise or knowledge needed to make ultra informed decisions about what is needed and how a plan should move forward. Woonband is a company that organizes and trains tenants. Part of their work will be to help professionalize the tenants over the upcoming years. The ministry itself will also work to help the municipalities and tenants to implement this new system. Time will tell how long it takes for the tenants and municipalities to grow the needed knowledge and expertise to successfully create and implement meaningful housing plans.

Inspections of the industry will also change. Before inspections of finances and housing inspections were in departments. All of the inspections will now be placed under the finance department because bad finances can often go hand in hand with poor housing decisions or governance. Housing corporations will need to focus on core business principles like building and managing social housing. The inspections will ensure both the finances and operations are sound. A new idea called “Fit and Proper’’ will examine Executive Directors of housing corporations behavior. A similar tactic is used in the banking sector. The idea is to look at a leader not only from the operational standpoint but whether or not she or he can take criticism or heed advice or ideals from other people. Leaders who are seen to have issues could lose their jobs. The industry also put limits on leaders of social housing companies of eight years. They receive two four year terms.

The changes implemented are designed to ensure the long term protection of both the social housing industry and the population in general. While ideals like monitoring executives of housing corporations, tighter inspections and a renewed focus on socially disadvantaged families is promising, it remains to be seen how things will work out long term. Empowering municipalities and tenants is a promising step however; the lack of knowledge in these groups could present problems at first. The housing corporations understand the industry well and concern must be given that the corporations do not dictate the entire conversation. There is no doubt their knowledge is important but the new system is supposed to create a partnership. That ideal should not be lost. The fit and proper test is a good idea to check the stability of leadership but it should not be over relied upon. A test every few years can not be the only indicator of a leader’s ability to make sound judgments on a day to day basis. A carful analysis of these changes will be an important tool in ensuring the social housing industry is safe, secure and strong in the future.